An institutional lunch has gathered in the Heydar Aliyev Centre two apparently different cultures: the Azerbaijani and French ones.
The 12th of May, Maiden Tower and Tour Eiffel are near, not only by virtue of the bilateral meeting and of the mutual understanding connecting these two countries, but also from a graphic point of view, thanks to the installation that made the front scene unique and unexpected. The emblems of the two countries are represented in the same skyline that becomes the background of the stage.

The Heydar Aliyev Foundation, dedicated to the former president, celebrates with a gala dinner the results obtained in the safeguard of the artistic heritage, in the social sphere and in the promotion of the Azerbaijani culture in the world
In 2014 the venue also marks the 10th anniversary of the Foundation. Simmetrico followed the creative project and the executive production of the event.

Business and Creativity seem so different, but they have the same rule: to keep the game alive, you need to rethink old beliefs. Daniele Zambelli, CEO of Simmetrico, together with Francesca Tirotti, Vice-President and Managing Partner, and Andrea Fiorito, Creative Director, reveal the company’s approach to design and creativity, where the “I” is replaced by the “WE” “and where the only rule of the game is to want to play. 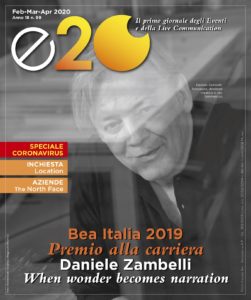