A great exhibition dedicated to Che Guevara, the myth, the hero, the fighter but above all the man.

50 years after his death, a great exhibition dedicated to Che Guevara: the myth, the hero, the fighter but, above all, the man.

The exhibition is produced by Alma, RTV Comercial de l’Avana and Centro de Estudios Guevara, coproduced with the Municipality of Milan, “Fabbrica del Vapore” and with the support of the University of Milan and University IULM for the deepening of the historical and geopolitical context.

In coherence with the philological objective of the exhibition, 3 narrative levels are designed to recount:

True friends never leave you during hard times. With a simple gesture, they give us strength to overcome also the impossible. Thanks to our Azerbaijani sisters and brothers for this touching expression of solidarity and friendship. #azerbaijanpavilion2020 #oneteamtogether #staycreative #staytuned 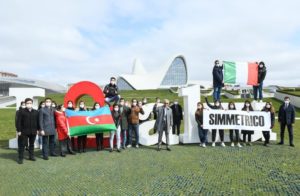